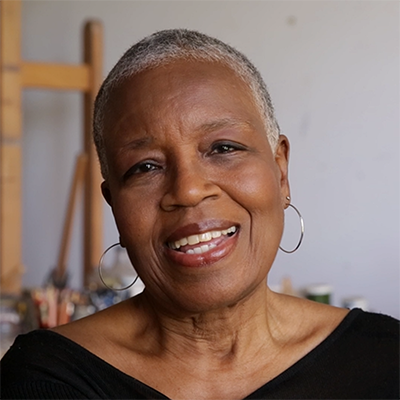 Engaged by history since childhood, a northern school desegregation pioneer at 8, she was one of the four children selected to break New York’s de facto segregation in the wake of Brown v. Board of Education. At 10, she was introduced to Dr. King.

A pioneer of issue-oriented African-American and women’s programming she has hosted and produced talk shows for public broadcasting and cable news. Her news writing for TV’s Black News earned her a special Emmy. Her day-long International Women’s Day marathon broadcasts brought her to NPR where she became the first National Arts Correspondent and opened the New York News Bureau.

An entrepreneur, as founder of BackPax (children’s publishing) and Harambee (the first national book club for African American literature), she changed the publishing scene for authors and readers.

A frequent on-air guest, she has appeared on ABC, BET, CBS, CNN, Fox News, NBC’s The Today Show, and NPR’s All Things Considered. With more than 500 articles, essays and columns to her credit, her work has been featured in Essence and Ms. Magazines, The New York Times, Newsday, USA Today, and The Washington Post. Her syndicated column ran in the Hearst Newspapers for sixteen years. Her commentary has been broadcast on CBS and NPR, and gone viral in the Huffington Post. Her book, Glory Days: 365 Inspired Moments in African American History, was licensed by McDonald’s; reaching more than 3 million readers.

A classically-trained pianist, she is a graduate of New York’s High School of Performing Arts. Her master’s is the nation’s first graduate degree in Black Studies. Her doctoral chair was human rights champion and author Shirley Graham Du Bois (widow of Dr. W. E. B. Du Bois: “Father of Pan-Africanism,” cofounder of the NAACP).

She has been awarded Doctor of Humane Letters degrees by Shaw University and the State University of New York.