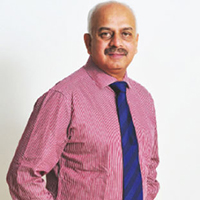 A pioneer in the sphere of Leadership and Executive Coaching in India, Krishna Kumar holds the firm belief that coaching is enlightening, transformational, at times magical, almost always healing and possessing the power to build a healthier and harmonious society. It is a belief that has carried him through a diverse and continuing learning journey over three decades where he has donned the hats of a senior corporate executive, an entrepreneur, a master tennis coaching professional, a B-school professor, independent Board member and as a Leadership and Executive Coach.

The Founder Director of the Intrad School of Executive Coaching (ISEC), Krishna Kumar is an active member of the international coaching community. He is presently the worldwide President and a Member on the Governing Board of the International Association of Coaching (IAC), globally recognized as a premier coach credentialing association.

A Partner with the UK based leadership and coaching firm, The Silk Road Partnership, Krishna Kumar has worked with global business leaders that include Indian, Asian, American, British, Canadian, French and German across various sectors helping them with strategy formulation.

Krishna Kumar started his corporate career with Madura Coats, the Indian subsidiary of the FTSE 100 firm, Coats Viyella plc (UK) in the early 1980s. After successfully managing several sales and marketing assignments within India, he went on to become the company’s first Export Sales Manager. He took charge of the company`s markets in EMEA and APJ, increasing the revenue of the company around 500 times in just four years. He was appointed Commercial Director of Coats Middle East at the age of 32 -the youngest ever overseas Director in the company - holding direct charge of 13 markets.

Having tasted success at the corporate level, Krishna Kumar began his Entrepreneurial journey. In a varied career spanning three decades, he has been a top management executive, an Executive coach, a visiting faculty at leading B-schools, independent Board member for several companies and a sports coach.

He frequently publishes and has been profiled in leading business magazines.

Krishna Kumar’s educational qualifications include a degree in Mechanical Engineering and an MBA from two of India’s Ivy League institutions, the Indian Institute of Technology and the Indian Institute of Management. He also has a general management certification from INSEAD. Presently he is an Adjunct faculty at the Indian institute of Management, Bangalore, where he offers a popular bi-annual Leadership Development program titled, “Creating High Performance Organizations.”