How to Teach Leaders to Navigate Complexity

Submitted by Sandra Martinez August 26, 2019 - 12:12pm
How to Teach Leaders to Navigate Complexity

For those of you who are new to vertical development, individuals in the first post-conventional stage begin to recognize that assumptions influence their belief system and tend to more readily question the norms of the various groups they belong to.  In contrast, our clients at conventional stages of development are less able to step outside themselves to ‘see’ their own biases and to reflect about what they are experiencing personally and interpersonally.

Characteristics of clients at most developed conventional stage of development

The Importance of Integrating Paradox

A crucial dimension of growth along the developmental trajectory is the degree to which leaders can acknowledge and leverage paradox.  This is critical because paradox or polarity is a bedrock dynamic of complex organizations. Paradox is there whether we recognize it or not.  We can be overcome by it or integrate it. 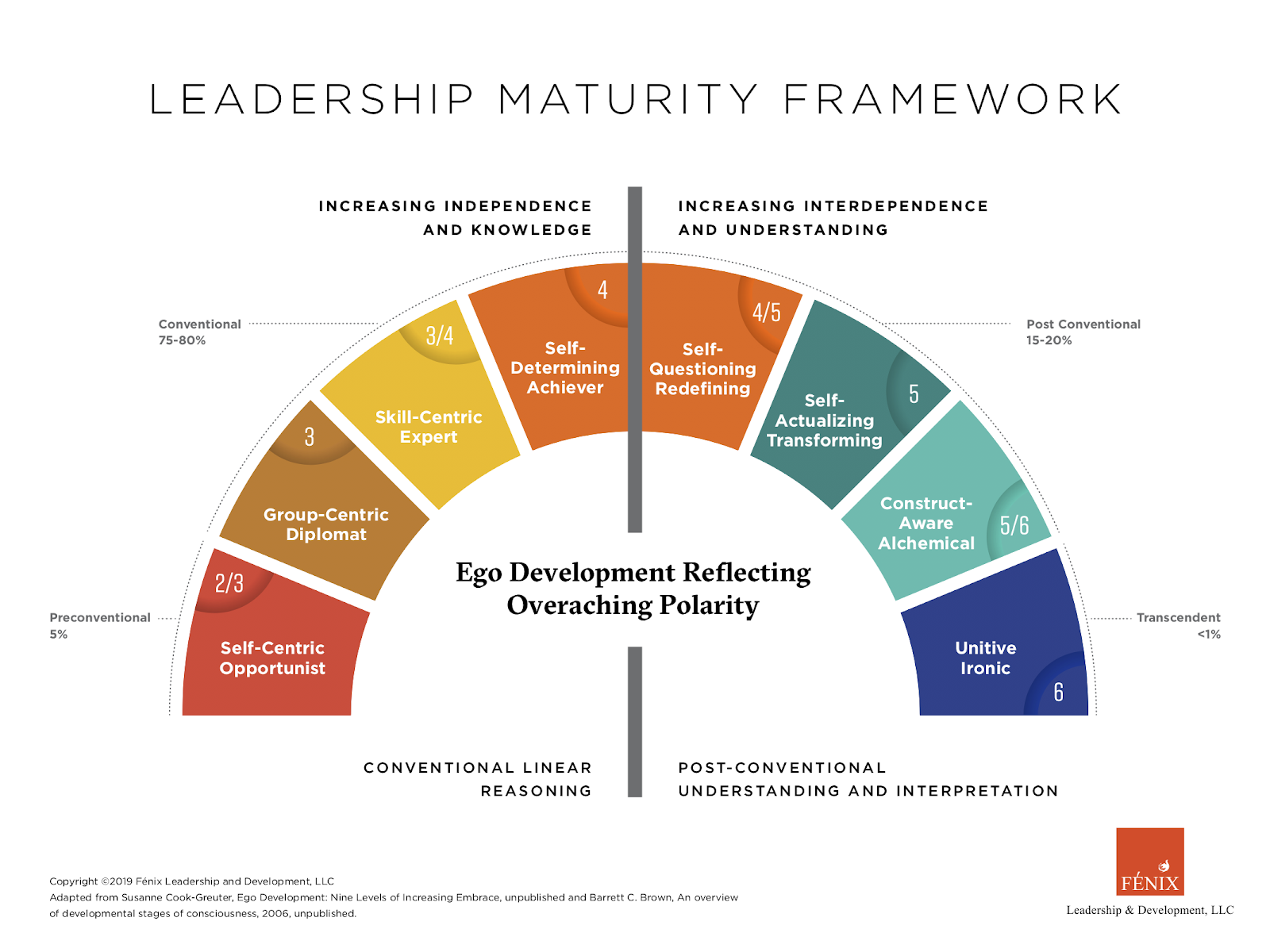 Add to this the churn and uncertainty of the environment and all the interactions that occur 24/7, which cannot be controlled or predicted, but which contribute to the leadership challenge for development.  It is indeed a complex world in which we live and work.  Paraphrasing Bob Kegan, most leaders are ‘in over their heads.’  They do not have the complexity of mind to match the complexity of their organization. How can they be effective leaders in these circumstances?

We, as coaches, need to honor and value the developmental level of all our clients AND we need to simultaneously recognize and nurture the leadership capacities that are required to effectively navigate complexity and lead transformation.  Given the challenges of today’s complex and interrelated world, this is an urgent call to action.

I have found that working with leaders to identify and plot the dynamic of polarities on a matrix helps them navigate complexity, no matter where they are in their stage of development.  Simultaneously, it is also a perspective and a tool which can stimulate their awareness and growth.

Devin was a retired marine and an ‘Eagle Scout,’ in the best sense of the word.  He worked in a security agency and was devoted to its mission.  His team provided time-sensitive analysis to a workforce in the field.  The consequences of inaccuracy or tardiness in delivery were severe.  As a result, the pressure was intense.

During our first conversation, he revealed that it greatly concerned him that he might be perceived as abusive of his team members.  He cared about the well-being and development of the members of his team, yet he knew that he made many demands of them in order to ensure that they deliver to a standard he viewed as acceptable.  He spoke disparagingly of colleagues whom he thought played the political game. He was not concerned about his popularity: he was a straight-shooter, he told it like it was, according to him.

As our coaching conversation continued, it became increasingly clear that one of the major tensions he was experiencing was the imperative he felt to be ‘honest,’ to speak directly and with immediacy to issues as they arose.  Honesty was a key element of his identify.  And he felt that, if he were not direct and ‘honest,’ that the down-side would be stagnation, preventing the delivery on results important to a critical mission.

Together we identified that the tension between the poles of Candor and Diplomacy were causing psychological and emotional tension for him.   I suggested that we use the Polarity Map® to understand these internal and interpersonal dynamics better.  I guided him as he elaborated the Map as illustrated here.

(Note that one of the first challenges for the coach is gaining confidence and skill in supporting the client to identity a paradox by listening to stories and descriptions of challenges and asking probing questions.) 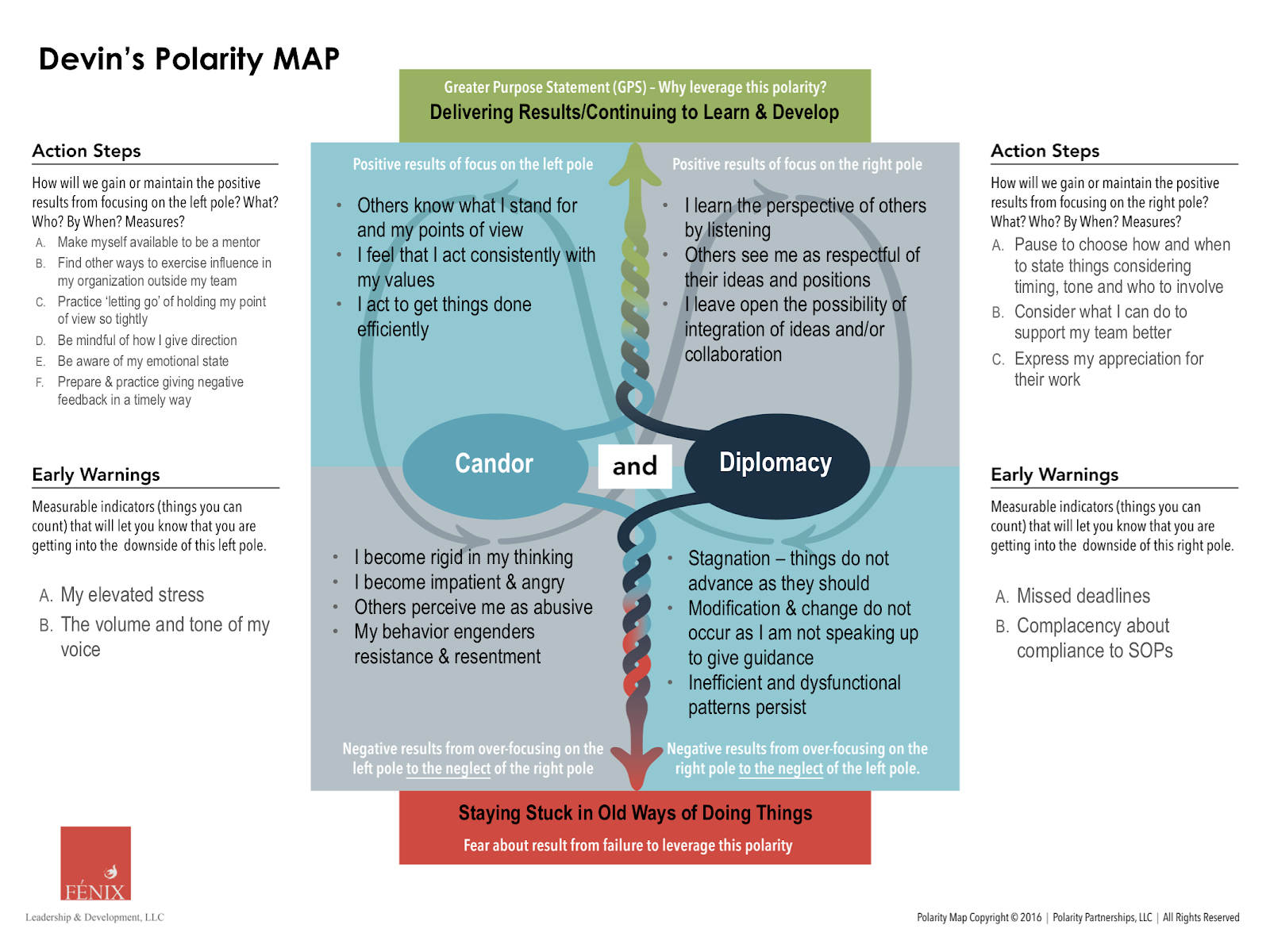 A paradox or polarity is a pair of interdependent behaviors, values or strategies that appear to be contradictory yet one needs to focus on both over time in order to succeed.  Polarities are present in our socio-emotional and psychological experience and they can be used in coaching and organizational development work on several scales:  the personal, interpersonal, team, organizational or eco-system levels.

I find paradox and the Polarity Map® to be powerful tools in unpacking complexity to help clients make sense of their experience and to identify and experiment with different approaches, perspectives and actions.  The Map illustrates both the yin and the yang and how each pole of a polarity has positive outcomes, as well as negative outcomes.

Thus, the understanding and insight that emerges for the client in this exercise supports a recognition of their preference.  The exercise also serves to highlight for the client the need to be aware of the influence of this preference on their decisions and actions, and why it is advisable to practice acting from a focus on the opposite, less favored pole.  The objective is to be capable of utilizing both poles, to be able to leverage both over time.

Through this coaching process, Devin grew to understand that he was still being ‘honest,’ a touchstone of his identity, even if he chose how, when, where, and with whom he shared feedback and information.  He didn’t need to share everything with everyone, at the same time and in the same way, in order to be ‘honest’.

He slowly realized that part of being an effective leader was considering his audience and his goals in leading them.  He committed to the practice by pausing in the midst of action to consider his process, in order to change his behavior, to make a choice, to alter a pattern that was ineffective.

In Devin’s case, mapping the polarity supported him in learning to ‘see’ and articulate more clearly the complexity of his internal experience, his actions, and the interdependence of these factors with those of his team..

I invite you to join other leadership professionals and experienced leader to practice identifying and mapping polarities, as well as other perspectives and tools to more effectively navigate complexity.  We gather at the Carnegie Institute for Science in Washington D.C. on September 12 and 13 for a highly interactive workshop to address the interrelated challenges of cultivating a diverse workplace, supporting high-achieving women and fostering innovation.   On the second day we explore jazz improvisation to practice acting in the midst of uncertainty and change.  See www.fenixleadershipconsulting.com for more information.

*These estimates come from US-based assessors.  A more generous estimate, around 42% of managers assessed at post-conventional stages, comes from a sample of 6,000 European leaders assessed through 2015 by Harthill Consulting in the UK (The Hidden Talent, PWS white paper).